Do you ever have those moments where you’re sitting on the couch watching the news, or you’re driving around doing errands, and the news or social commentaries come on, and a certain group of trendy words in the news realm have rolled through like a tidal wave?

Maybe watching a TV show and the popular, trendy words are shot out of the mouths of the actors, perpetuating those same words over and over again?

Or maybe you’re checking out your Facebook or Twitter newsfeed (where it’s the worst), and those same words are splattered all over the screen tenfold? Most likely even trending on Twitter.

At first, maybe you thought, “Okay, I can understand their using this or that word to describe their emotions, opinions, thoughts, whatever on a particular subject.”

But at some point, if you’ve been hearing these “In” words for several months, maybe even longer and you’re like me, irritation kicks in, no matter your feelings on the topics being discussed and even agreeing a majority of the time with those using those particularly tiresome words.

So, I thought I’d mention a few that have reached the tipping point for me that I’m thinking, “Okay, enough. Let it go, drop this language and move on, for God’s sake.”

And one of them is just so juvenile and stupid, it’s not even run its course, and I’m sick of it already (hint: it’s the first one on the list below).

Here are some of them off the top of my head:

…and the worst one of all: 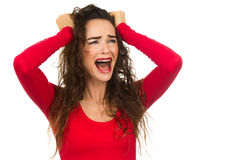 Look, I get people are frustrated, and they want to express their frustration or anger. As I said, generally, I have agreed with a majority of these people on certain issues. But really, it’s done hopped on that beaten horse, and rode it to death.

Of course, what words will replace these? Probably other tiresome words. Haha.

I’m sure there are many other words that didn’t come to me while typing this blog post. Maybe you know of some I didn’t mention that have reached aggravation levels for you, as well. Feel free to add, if you wish. After all, it’s just a little venting. 🙂