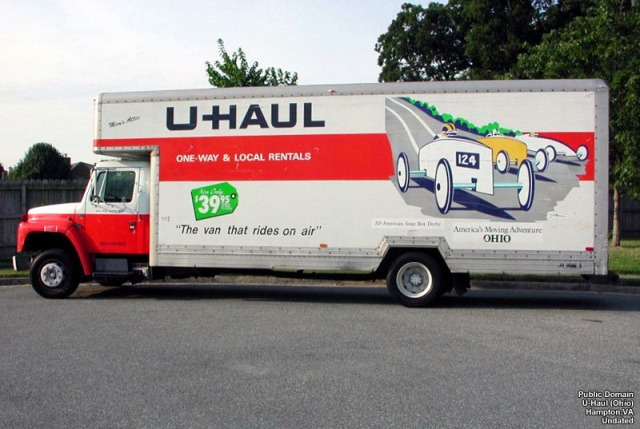 Friends, sorry for MIA for the past few weeks. My family is busy in transition.

My husband, Troy, has obtained a new job in the same career field of maintenance and facilities manager/director of a school district, but this job is not in our present town of Lancaster, Pennsylvania, but in Commerce City, Colorado. This city is on the northeastern outskirts of the Denver area.

Troy drove out Thursday late morning and arrived late Friday afternoon in Colorado Springs, where he’s staying with a friend of ours for the time being until some place else opens up to him until he flies back to collect my sons and me on October 5.

He starts his new job on Monday, August 26.

Around August 15, we gave our landlord the required 60-day notice of leaving the rental house.

So, while he’s out West working and house hunting (and sharing the house walk through experience with me via FaceTime and texting), I’m busy packing up the house, with a little help from my oldest son, Nicholas.

I have to tell you, packing gets really old when you’ve done it at least three times before and watched the packers and movers clear out your various homes via many military moves, as well as the nine or so moves through my childhood and teens via my dad’s military moves. There were a few in between Dad’s retirement and meeting my active-duty husband a few years later.

The thought of packing up those flattened boxes in our cellar and garage once again doesn’t really excite me, but it has to be done. So, last weekend, I started packing and get  an average of three boxes done a day.

The good thing about this move is we’re returning to our favorite state. The state where we wanted to retire years ago but didn’t because the plans changed when hubby decided to go to graduate school in Boston.

In any case, God has granted us the blessing of returning to where we consider HOME. A beautiful place filled with our church family and friends. And the Rocky Mountains that we never get sick of seeing every morning, afternoon, and evening, on our walks, doing errands, going to work, and visiting friends.

Therefore, this explains my absence from my blog lately and explains it for the future chunks of time away due to packing and moving in the coming month.

Have you moved around a lot? Do you have a favorite place or state or country you prefer to live in? Are you a military brat like me?

Hope to be back at blogging when I get the time. After all, I’ve got a manuscript to send to my editor once I’m settled into our new home. 🙂 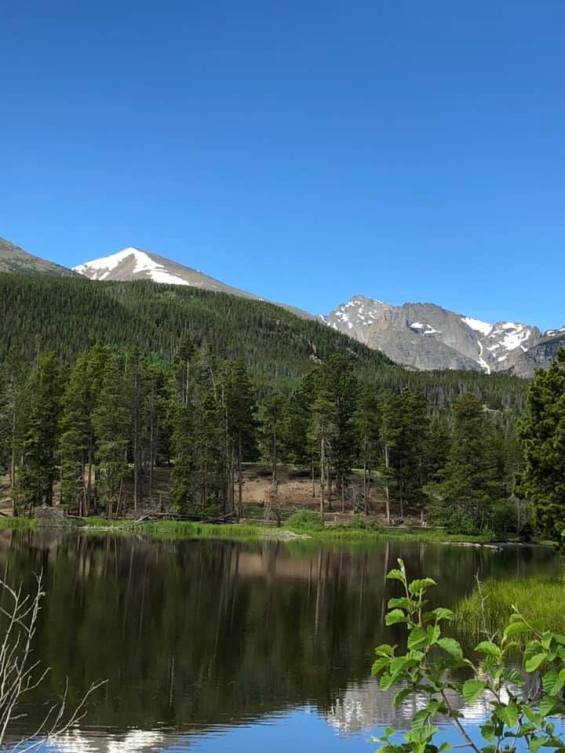 Do you have a hard time getting back into your writing after you’ve been on vacation?  Do you get totally and happily lost in trekking in the peaceful, scenic, and rugged landscape of the Rocky Mountains for two weeks?

(One of the trails we trekked in Rocky Mountain National Park)

Maybe hung out at an absolutely gorgeous lake?

Okay, maybe you spent your holiday on the beach or zip-lining through the rainforests of Brazil.

In any case, when my family left for our vacation to Colorado (once again. Our last vacation there was June 2017), I’d left my computer at home but brought along a small notebook in case I wanted to jot anything down regarding the experiences I encountered on my trip. And I did. I also wrote a page and a half of a story I’d written notes on a few months ago. The latter was done on the train ride back to Chicago before we picked up our car that had been sitting in the parking garage and headed home.

But still, my mind, body, and spirit absorbed the beautiful surroundings of Colorado Springs where we caught up with dear friends, but most especially, Estes Park and Rocky Mountain National Park. We walked four trails while there, and it was exhilarating.

(Hubby walking ahead of me on our second hike, just me and him) 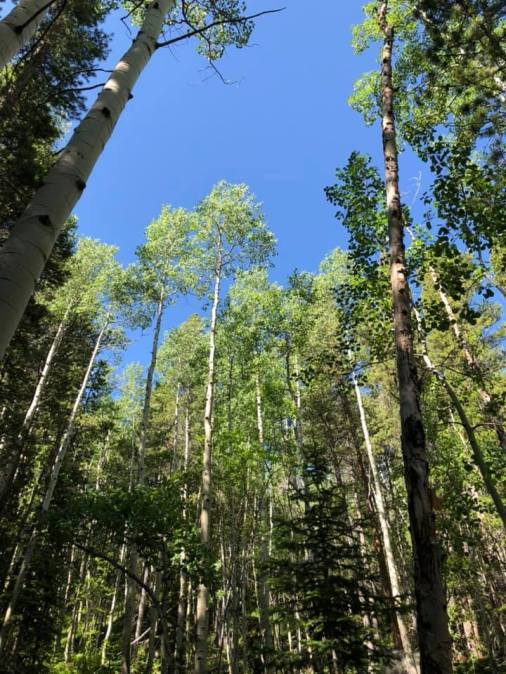 (Canopy of pines and aspens)

(Mid to lower section of Alberta Falls in RMNP)

And had visitors right outside our cabin. 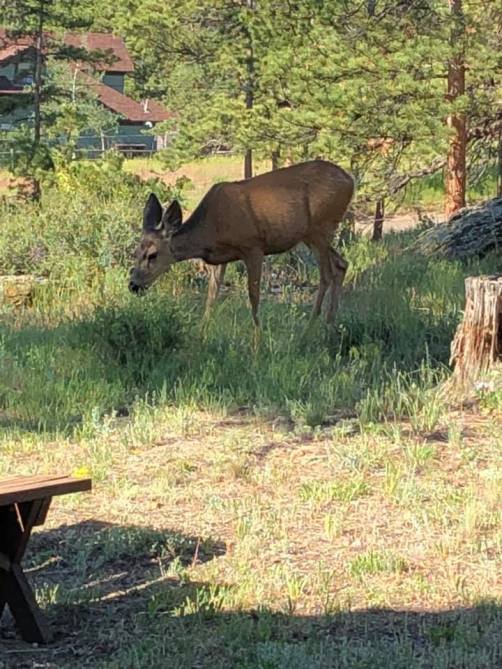 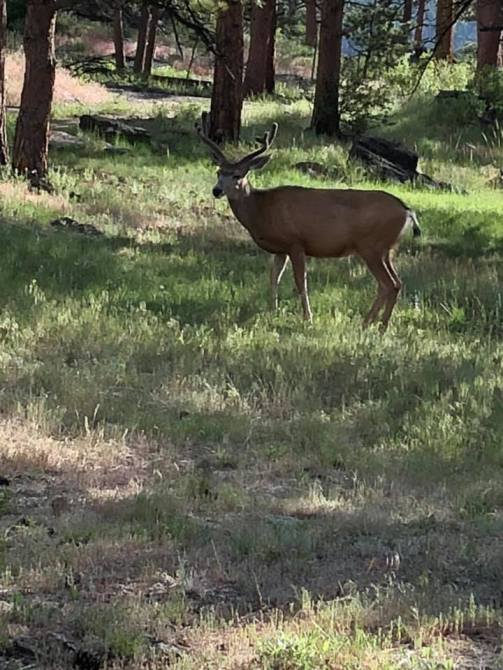 (Buck right near our cabin, as well)

For a little while those first couple of days back home, I worried I’d not want to finish my WIP, but by the third day home, I was finally able to focus and re-immerse myself in my story and others’ stories via my online critique group.

I think what helped get me interested again in my story was submitting the next chapters and reading the ones already in the queue. My characters and the storyline drew me back in. Whew. Thank God!

So, it’s back to the story-creating world for me, while keeping the memories of my favorite place, Colorado, always in my heart, for we want to return to Colorado in three years, after our youngest has finished high school.

When you return from a well-needed and relaxing vacation, how do you get your mind and fingers back into your writing?

Last weekend, Friday July 6 through Monday July 9, my family spent it wandering around our historic nation’s capital, Washington, D.C.  We walked those four days and got quite the workout.  Except for the first day that was sweltering hot, transforming me into a soggy, drippy human puddle, the walk was absolutely beautiful and a good challenge to my under-exercised body. 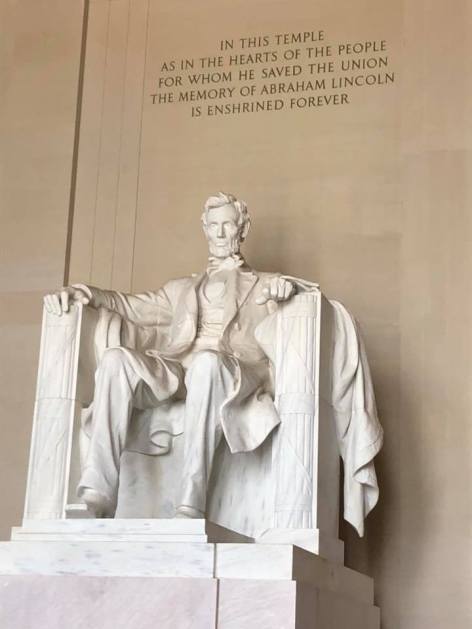 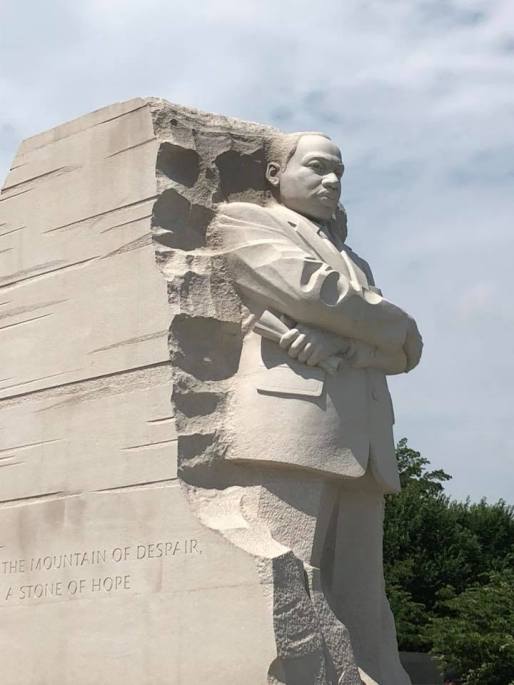 My oldest, Nicholas, also liked the African American History Museum.  We both did.  It was a very moving and impacting experience.  It is three stories full of the history of African Americans, starting with their origins in Africa to the slave ships, slave trade, sugar plantations and the like, and the distinguished men and women in the latter years, including Phillis Wheatley, for whom I wrote about in a blog post a couple of weeks ago!  That was especially cool for me to read an excerpt from her poem on display and see her statue.

Each floor progressed further in history.  The second story was my favorite.  It held the 1950s and 1960s Civil Rights artifacts and videos.  It also had a special exhibit going on while we were there.  What timing!  They had on display for a limited time, the casket that young Emmett Till had been buried in until 2005/2006 (can’t remember which year, but it was one of them).  There was a line meandering through the second floor.  We waited about forty-five minutes or so to go into the room where the coffin was to read about it and look at it.

Gospel music was playing when we entered the room, which tested my ability to keep my tears at bay, and a large sized photograph of Emmett’s destroyed face taken by a newspaper (I think it was Jet) was in a gold picture frame set in the coffin representing him.  Thankfully, the casket was elevated, and the coffin’s ledge of the open casket was at my eye level, and I couldn’t see the photo.  Incidentally, I’d already seen the photo when I’d watched the excellent documentary Eyes on the Prize a couple of years ago.  I didn’t need to see it again.

My oldest son, Nicholas, was behind me sniffling.  He said he saw a sliver of the side of Emmett’s battered face and couldn’t bear to see anymore, so he looked away.  We walked out of there feeling the grief of the murder of a young boy.

A video was in an alcove explaining the murder of Emmett.  Nicholas, poor guy, shed many tears and sniffled a lot.  What a huge heart my son has!  I managed to stave off the tears that had collected in my eyes.

The next day we went to the Air and Space Museum and looked at all the airplanes and early aircrafts used to fly.  We also watched a twenty-five minute film in the planetarium on dark matter, which was fascinating.  Don’t ask me to explain dark matter because most of what was presented in the film was quite complicated.  But we collectively agreed that was the most interesting film we’d ever see in a planetarium, and we’d seen quite a few in the past! 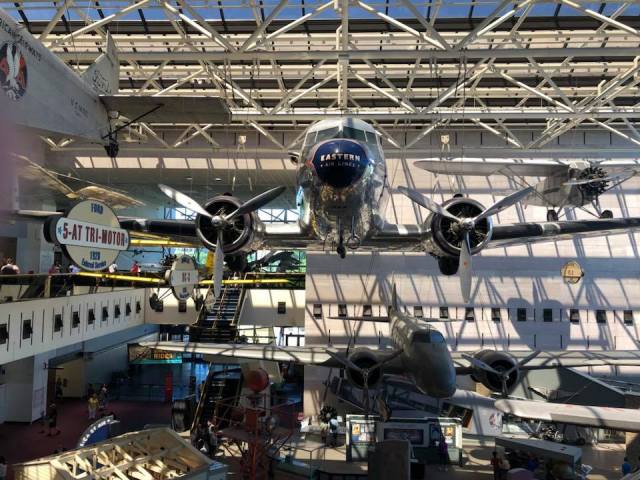 We then headed to one of the museums I’d been waiting for, the National Gallery of Art.  This was a HUGE edifice, as were the others, but this one had two unattached buildings that were a West and an East building.  We only got through the first floor and partially the bottom floor.  There was too much to take in in the few hours open and available to us!  But I saw the early art work by the American artists I’d studied last term in my American Art class, and that was really cool.

I took a picture of one of the paintings of my favorite landscape artist, Albert Bierstadt.  It’s called Lake Lucerne, if I remember correctly.  What a beauty!  I wanted to walk into the scene, it’s so peaceful and gorgeous.

Lastly, I took a picture of artist, Hiram Power’s incredibly beautiful sculpture, The Greek Slave.  I studied this piece in my American Art course.  It was quite the talk of the public and controversial at the time.  Here’s an excerpt on the story behind the sculpture via The Metropolitan Museum of Art:

“The full-length female nude represents a bound prisoner being sold in a Turkish slave market, an allusion to the atrocities that the Turks committed during the Greek War of Independence, and, by implication, to the ongoing debate over slavery in the United States. The Greek Slave toured American cities from Boston to New Orleans between 1847 and 1849, and again into the 1850s, where it drew huge crowds and brought forth, alternatively, outpourings of protest and praise. Miner Kellogg, manager of the statue’s organized tour, assembled a descriptive pamphlet emphasizing the figure’s “high moral and intellectual beauty,” suggesting that—though nude—it was “clothed” in Christian piety. The Greek Slave was also shown in London in 1845 and 1848, and was a centerpiece of the United States display at the Great Exhibition in 1851.”

I’d seen a black and white photo of it in a linked article in my American Art course and a color one in the printed textbook I have, but that did little justice to what I saw in person.  It was beyond beautiful in person.  A real brilliant and gorgeous work of art!

We then walked up to Chinatown that my son, Nicholas, wanted to see so much.  We bought a few souvenirs there and headed back to the hotel.

We finished off our vacation with a visit to Arlington Cemetery where we saw the graves of some well known figures in American history. 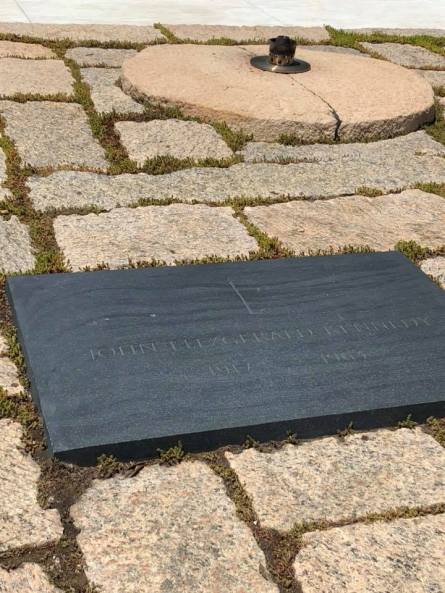 We’ll be back some time soon to see all the other museums and the rest of the art museum!